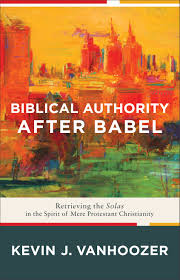 I just finished this book by Kevin J. Vanhoozer.  I enjoyed reading it, but it was not an easy read.  I’m meeting with a small group of men to finish discussing the book in a little over a week.  I’m going to try to read the book again before we meet in order to have a better understanding of the ideas presented.

This is a good book to read this year as it is the 500th anniversary of the day that Martin Luther nailed the 95 theses to the church door at Wittenburg.  I thought it would be good this year to do some reading and thinking about the significance of the Protestant Reformation.

The author debates the claim that the Reformation was not a positive development in the history of the church since it unleashed interpretative pluralism.  There were five “solas” emphasized in the Reformation: sola gratia (grace alone), sola fide (faith alone), sola scriptura (Scripture alone), solus Christus (Christ alone) and soli Deo gloria (for the glory of God alone).  The author argues for “mere Protestant Christianity” and that these five solas should not be considered individually, but as a group.  The author even adds his own sola: sola ecclesia (church alone).

The author wants to “retrieve” the solas in order to address the contemporary critique of the Reformation: sola gratia addresses the charge of secularization by locating biblical interpretation in the economy of triune communicative activity, sola fide and sola scriptura address the charge of skepticism by focusing on the principle and pattern of the “economy of theological authority”, solus Christus is used against the charge of schism (via the teaching on the royal priesthood of all believers).  Lastly, soli Deo gloria addresses the challenge of hyperplurality and interpretive disagreement in the church.

I plan to do a few more posts about some of the specific ideas in this book.

One thought on “Retrieving the Solas”