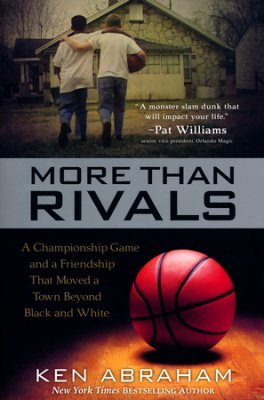 What a great book!  I would highly recommend it, especially if you enjoy basketball.

I read this whole book in less than 48 hours since I couldn’t put it down.  It was a nice follow up story to a 570 page book on Plato and Aristotle (although good, a different kind of read).

We just finished the season of the San Marcos High School boys basketball team.  My two older sons were on the team.  They went undefeated in Channel League, won the CIF championship and made it to the second game in state.  It was truly a magical season, and it was about so much more than basketball.  I was so inspired by my sons and their teammates.  Their hard work, the way they worked together as a team, the way they drew the community together was amazing.  Every time one of them was interviewed, he would start talking about the other players and their contributions.  They all believed that the biggest reason for their success was their unselfish devotion to their team, their unity and love for one another.  They didn’t care who scored or shined in any particular game – as long as they stuck together as a team and worked together to win.  My favorite part of the home games was at the end of the game when the students would rush onto the court and my sons and their teammates would be jumping up and down celebrating with their fellow students and supporters.

Keep in mind that these are the same guys who didn’t win one of their league games their freshmen year!  Anyway, we were their biggest fans.  As the season rolled along, more and more of our friends and neighbors attended the games.  They kept coming back.

The whole basketball season was on the heels of the Thomas Fire in December and the mudslides in Montecito in early January.  They had numerous games and practices cancelled because of these tragedies, but they never gave up.  If you want to get a taste of what their season was about, check out sanmarcosbasketball on Instgram!

Anyway, back to the book.  The story is about so much more than basketball.  It shows how people can overcome years of prejudice and discrimination with love.  Two team leaders, one white and one black, help to save the town from disaster and set the direction for a future of equality and mutual respect.

Here’s a picture of the two real life heroes: